Which is worse, Disk 1 unknown not initialized with unallocated storage size or NO SIZE AT ALL

When western digital shows 'Disk 1 unknown not initialized Unallocated', it means the disk can still be detected with its storage capacity while when the disk shows no size at all stated a more worse damage on this western digital hd.

How to fix western digital disk 1 unknown not initialized error

Note: we would strongly recommend you retrieve files from unknown not initialized disk before the repairing since when it starts to repair the disk, potential damages/changes would be made to the disk, which is kind of writing data to the damaged disk. It's kind of losing old files by the process of repairing.

Failed by the above methods? Try 8 free tools to fix disk unknown not initialized error

When the disk shows unknown

When disk shows unknown, which means the western digital could not be recognized normally as a healthy disk, usually a healthy disk would display the following information in disk management.

Once you have restored the data from the wd external disk or internal hd you built in your computer, you may start initializing it in disk management by right click the disk, and then it would pop up a box telling you to initialize it. 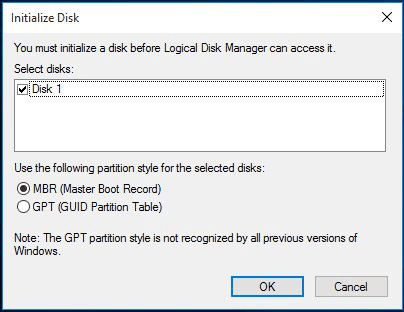 We would recommend you try MBR at first and then you can convert it to GPT later, or you may select GPT as you wish in the first step when usually GPT is more popular with more abilities for holding data and with better performances.

MBR is more accepted by third party software while GPT is less supported in the market since the later one was not all supported by software developers due to technology update delay.