SD/CF Card Not Formatted Kodak - How to format Memory Card

Camera says card not formatted, format card with this camera

Why is Kodak showing message 'CARD IS NOT FORMATTED' Error?

How do you fix Kodak pixpro az252 sd card not formatted error?

Quick answer: Kodak is not compatible with the sd card or cf card that you use. A smaller sd card would work.

Here is a video that shows Kodak is not working with Sandisk 64GB sd card but it works with a 32GB sd card.

Quick fix the sd card error: use a 32GB memory card instead that would quickly resolve the problem.

How do I fix Kodak memory card format card error

1 - It's a new sd/sdhc/cf card that has not been formatted with kodak camera -> format card with camera without hesitation.

How to format memory card sd/cf for Kodak

"CARD IS NOT FORMATTED" ERROR MESSAGE ON FZ53

Video - how to format cf card on kodak

3 - It's a memory card sd/cf card that has been using on the camera and suddenly it has logical errors or physical damages such as chip dying... -> recover data, repair memory card

Connect the cf/SD card to the computer. Download free kodak memory card recovery software iCare Pro that is able to recover images/videos from camera sd/cf card on Windows computer when your memory card has not formatted error.

If the repairing does not work, you may try format it on a computer by right click format. 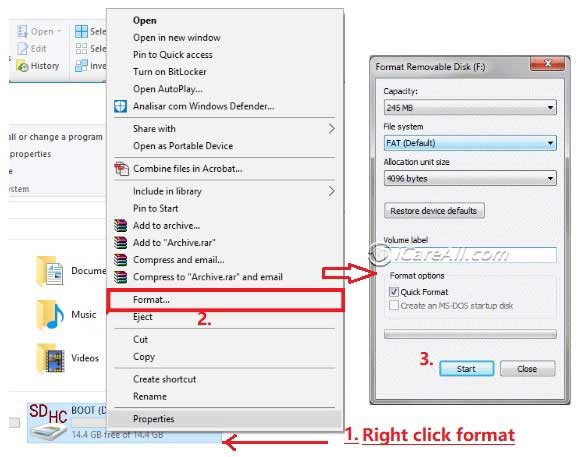 Answer: There are several causes when an sd card won't format on a camera.

Question: What does it mean when Kodak camera says card not formatted?

Answer: If the image were set to store on the kodak internal memory, the camera won't read the sd card or cf card and it may ask a formatting. Or the memory card driver may needs update. Here is a link to update sd card driver which applied to cf card too.

Link: how to update sd card driver for camera on a computer

Format sd card on Kodak camera would be the best choice, if it won't format, or won't work, change a smaller memory card less than 32gb to try.