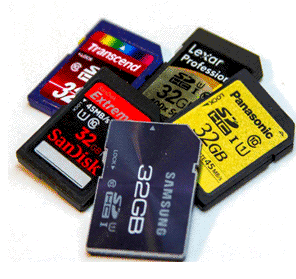 How to recover files after reformat SD card by mistake

SDHC card is short for Secure Digital High Capacity card, which is the successor to SD card. The feature of an SDHC card is its high capacities which are from 2GB to 32GB. SDHC card must be formatted into FAT32 file system in order to be compatible with an electronic device.

SDXC card does not only have a quite large capacity, but also it has a fast speed at data transferring. The capacity of an SDXC card can be 64GB.

CF card is a flash memory card which was manufactured by SanDisk in 1994. CF card has the features of high capacity, low cost and good compatibility. The shortcoming of CF card is that it has a large size. CF card is widely used in PDA, laptops, digital camera and desktops. CF card is usually formatted into FAT16 file system. CF card has a large number of OEM users and partners, which include Canon, LG, Casio, Nikon, Kodak, NEC, Polaroid, Panasonic, Psion, HP, etc.

XD card, namely XD-Picture card, was developed by FujiFilm and Olympus. XD card is usually for photo storage, which is often used in FujiFilm digital camera and Olympus digital camera. Compared with other types of memory card, XD card has a small capacity. The first-generation XD card only has a capacity of 512MB. The maximum capacity of today’s XD card is not larger than 2GB.

MMC, short for Multimedia card, is a type of memory card unveiled by SanDisk and Siemens in 1997. MMC card has a large size compared with CF card. MMC card is usually available in digital cameras, mobile phones and PDA. MMC cards include RS-MMC, MD-MMC, MMC PLUS, MMC mobile, MMC micro and DV-MMC.

Whenver you lose any data from any type of memory card due to any reason, you are able to recover files from memory card with iCare Data Recovery.

What Should You Pay Attention to When Buying a Memory Card?

When you buy a memory card, you should make sure if it can be compatible with the electronic device you want to use. Various kinds of memory cards have different compatibilities.

2. Be careful with fake memory card