When referring to blue screen of death, many people consider it as a problem that usually occurs on Windows computer. However, many Apple users also meet the same problem on their iPhone 5S. Many iPhone 5S users recently run into the problem that their phone shows blue screen of death all of a sudden when they are using it to watch movies or do something else and then the iPhone 5S reboots automatically.

Usually, the blue screen of death only appear on your iPhone 5S for several seconds, after which the screen of the iPhone 5S will turn to black and the device will reboot itself.

1. The iWork App in iOS has bugs, which causes the blue screen of problem on their device.
2. The other possible reason is that the iPhone 5S is dead while multitasking among different applications..

How to Fix Blue Screen Issue for iPhone 5S?

The solutions are different since the problem is caused by different reasons:

1. If the iPhone 5S reports blue screen problem and reboots when you are running iWork App, you can try to fix the problem by disable iCloud sync for iWork App. You can disable iCloud sync for iWork App in iPhone 5S by following: click "Settings" > click "iCloud" > select "Documents and Data" > put the toggle from "On" to "Off" for all documents and data option so as to disable the iCloud to sync the iWork App data. 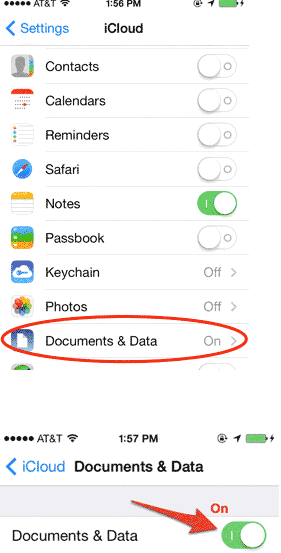 2. For the blue screen on iPhone 5S resulting from multitasking among Apps, you just need to fix the problem by pressing "back" rather than pressing "Home" button when you attempt to close iWork App on your iPhone 5S.

3. If you are not sure why your iPhone changes to blue screen, you can also try following method to fix the problem:

Data Recovery from iPhone 5S after Blue Screen of Death