How to Recover Data after iOS 9.3.1 Update

How can you update to iOS 9.3.1 from iOS 9.3 or previous iOS version? Are you able to retrieve lost files from iOS device after performing iOS 9.3.1 updating?

It is not a difficult thing to update your iPhone, iPad or iPod touch to iOS 9.3.1, but an unaffordable loss is that you may lose some or even all data stored on your device after updating to iOS 9.3.1. Without any reason, you may find that some pictures, videos, SMS text messages, music, documents, contacts, calendar, etc are lost when you attempt to view them on your iPhone or other iOS device after iOS 9.3.1 update. Or sometimes, your iPhone shows blue screen of death, white apple logo screen of death, black screen or other error after iOS 9.3.1 upgrading. If you use iTunes to update your device to iOS 9.3.1, it usually erases all data stored on the device when you use it to resore firmware. In addition, when you update a jailbroken iPhone, iPod touch or iPad with iTunes, it may report unknown error like error 56 code during iOS update.

It has become a common and annoying problem for many iOS device users to recover data lost due to iOS 9.3.1 updating.

Whether it causes data loss or not due to upgrading iOS 9.3.1, it is better to back up your iOS device before performing iOS 9.3.1 updating. For all Apple users, it is a good choice to backup data with iTunes or iCloud. Therefore, you can retrieve lost files including photos, audio files, mp4 files, AVI files, contacts, text messages, documents, etc from iPhone, iPad and iPod touch from iTunes / iCloud backup.

You can restore iPhone from iCloud backup by following:
Step1. Click Settings > General > Reset > Erase All Content and Settings

Step2. Click the screen when entering the Hello screen and then click Restore from iCloud Backup and sign into iCloud with Apple ID which contains the backup data. 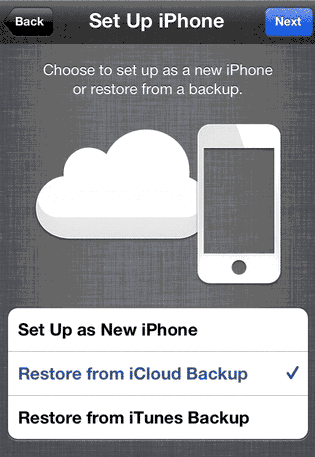 Step3. Choose the backups in iCloud and wait patiently before the backup data is restored to your device.

You can also recover data from your iOS device after iOS 9.3.1 updating by iTunes backup:
Step1. Connect the device to your computer and run the iTunes on the computer.
Step2. Click the iOS device (iPhone, iPad or iPod touch) and then click Restore from Backup.
Step3. Choose the backup data you need and click Restore button to recover it to the iOS device.