Has your computer (desktop or laptop) run into black screen of death problem, at which point you cannot do anything on PC? Black screen of death, short for BKSOD, is an error screen usually showing on different computers resulting from various kinds of reasons.

If running into black screen whether when just booting your computer or during the usage of PC, the first thing trying to fix the problem is to check the hardware issue to see if the problem is caused by damaged or improper connection of hardware.

To check hardware problem, you can switch off computer and take apart the case of computer to check and find the problem. Usually, you just need to connect each hardware properly or you have to replace the hardware if it is damaged. 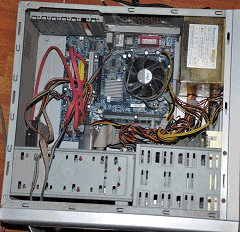 1. It is important to turn off your desktop or laptop normally before taking it apart.

2. You should not take apart the computer if you do not have many skills on how to handle with it. Otherwise, it might cause further damage and cause more serious problems.

If hardware has no problem, the problem should be caused by logical failure. To fix a computer that show black screen due to logical failure, it is necessary to know how it occurs. When you encounter BKSOD problem, you can try to reboot your computer to see if it can start normally. As long as you can boot PC normally, you can do following things:

Run antivirus software to check and fix virus, malware or Trojan. Virus attack is a problem that occurs on every computer no matter how careful you are. Your PC is at a risk or virus infection every day when you receive emails, visit different websites, shop online and more.

The system might be corrupted due to virus infection or many other unknown reasons. If so, you need to repair crashed system. You can attach Windows DVD to your computer and then press F2 when restarting your computer. Then, click "Repair your Computer" and open CMD where you can type "BCDEDIT /SET {DEFAULT} BOOTMENUPOLICY LEGACY" and press "Enter" to fix the problem.

You can also restore system back to previous state if you have made system restore point in advance.

You can boot computer with last known good configuration to fix the problem. You can follow the guide below: 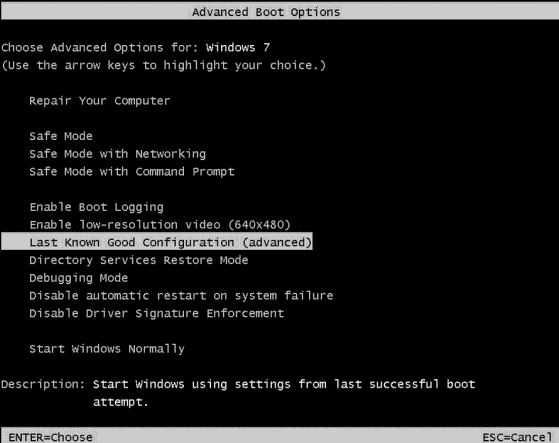 Usually, the problem can be repaired successfully when Windows boots normally.

If you install new driver which is not proper or compatible with the hardware of computer, it might cause black screen. In this situation, you can uninstall or downgrade the driver.

To uninstall a driver, you can click "Management" > "Device Manager > click the drivers you want to uninstall (e.g. Video card) and then select "Uninstall" 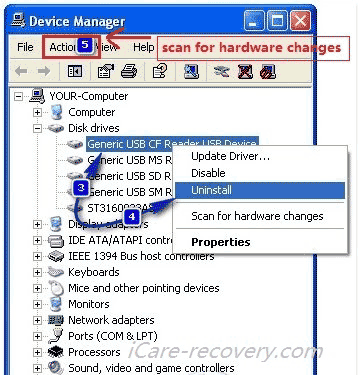 >> Downgrade the driver back to previous version

If the new driver is not compatible with PC and causes black screen problem, you can downgrade it back to previous version by following: "Management" > "Device Manager" > Double click the category of device that causes the problem and then double click the driver that has problem > select "Properties" > Click "Roll Back Driver" under "Driver" tab and click "OK" button to confirm to restore the driver back to previous version (Here, you can also click "Update Driver" and click "OK" button so as to update the driver software for the device). 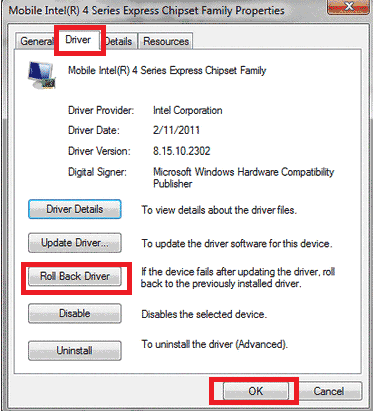 If you have installed conflict software on computer, you had better uninstall one of them to get rid of the black screen of death problem.

How to Prevent Black Screen Disaster?

To protect Windows 10, 8, 7, Vista and XP from running into black screen, you can do following things:

1. You should install proper hardware and make sure it is connected well to your computer.
2. Update drivers on your computer to make it always be compatible with PC.
3. If it is laptop, you should always put it in safe place to avoid physical damage to it, so does a desktop. Keep careful when using your computer in case of any unexpected physical damage.
4. Do not visit unsafe sites or receive stranger's emails. In addition, install and update antivirus program on your computer to make it workable to protect your computer from being attacked by virus or spyware.
5. Make sure if it is compatible with Windows system or has conflict with other programs when you need to install new software on PC.

Symptoms of Black Screen of Death

Sometimes, PC is stuck at black screen without showing any message when you boot your computer. Or sometimes, computer turns into black screen showing some error message all of a sudden when you are handing something on PC.

Here are some common symptoms of black screen issue:

Black screen is a problem that can result from hardware problem, software problem and more. Will black screen cause any serious disaster to your computer, hard drive, disk data, etc? The risk and severity of disaster depends on the reasons that result in this problem. Generally speaking, if it is hardware problem that causes black screen, it does not cause much hurt to your computer or data stored on it. However, if it is logical damage like system problem, virus infection, etc that lead to the black screen, it might have some influence on the computer or data.

Therefore, if you are not sure why your computer often runs into black screen problem, you had better stop storing important files to it. Or if possible, you can make a backup for essential data or backup the whole computer. At least, backup C drive system partition in case of system crash due to black screen of PC.

To fix a problem, the first thing is to know why it occurs. Here are possible causes for PC black screen disaster:

Hardware issue can lead a computer to show black screen. PC might appear black screen of one of the following hardware components has any problem:

Power supply: It is one of the most common issues that results in black screen issue. For example, if a personal computer shows black screen when you add new equipment to it, probably it is shortage of power supply that causes the problem as long as you are sure that the equipment works fine and is compatible with the PC. In addition, some motherboard has AT/ATX power supply interface, wrong settings or wire jumper on motherboard may also cause the problem.

Computer accessories: If the accessories of computer such as motherboard, CMOS, internal memory, graphics card, etc have bad quality or get corrupted, it would also cause black screen problem. When such kind of problem occurs, the light of monitor often turns to orange. Besides, black screen issue might also appear if the connection of different computer components is not good.

Incompatibility problem: Sometimes, the incompatibility of some hardware is another cause of the black screen disaster. For example, the graphics card or internal memory is not compatible with the computer, computer may show black screen.

CPU: If the temperature of CPU is too high, fans stop working, overclock or CPU gets corrupted and stops working, it would lead the black screen too.

In a word, hardware issue is a common problem that probably results in PC black screen problem.  In most case, if your computer turns into black screen without appearing any message, the problem is probably caused by hardware issue. However, such kind of problem is easy to resolve. We will introduce methods later.

Have you ever met black screen on other digital device like smartphone or iPhone in addition to computer? In fact, it is not a problem that many mobile phone or iPhone users have ever encountered.

Black screen of An iPhone is usually caused by following possible reasons:
1. The iPhone is a fake one which has a bad quality
2. Your iPhone has entered into DFU mode
3. The hardware of iPhone is corrupted
4. The iOS system is corrupted due to jailbreak, virus attack, etc.

If iPhone hardware is damaged, you may need to send it to its manufacturer to fix it. If iOS is corrupted, you can reinstall system. If iPhone has entered into DFU mode, you can follow the guide below:

Connect the iPhone to your computer on which there is iTunes being installed > Press the Power and Home button at the same time on your iPhone for nearly10 seconds > release the Power button and keep pressing Home button only > press Shift key and click Restore button on iTunes to restore the iPhone. 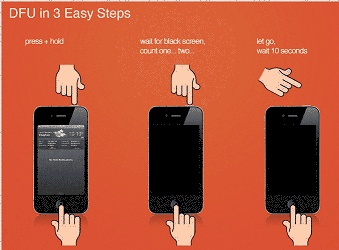 An Android phone sometimes turn into black screen when you have open too many Apps on it which lead the overwork of system, so your cellphone shows black screen. In this situation, you only need to restart the smartphone to fix the problem. To avoid such kind of problem, you had better not open too many Apps at the same time on your phone. Regularly clear your phone is needed.

In addition to what mentioned above, it is also necessary to prevent virus infection or system crash of Android or iOS in order to avoid the issues.

Blue screen of death is another problem on your computer. To some extent, blue screen is a much more difficult problem to resolve. If you run into blue screen of problem, please see another article on this site - How to fix Blue Screen of Death>>